Come What May Blu-ray Review 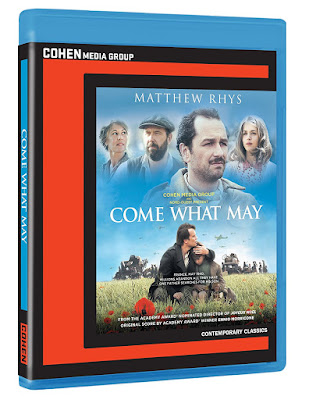 Come What May is evidence that there is no shortage of narratives from World War II to be told or of national cinemas willing to repeatedly dip into this well for creative inspiration. French filmmaker Christian Carion returns to the war genre with the same sentimentality utilized in his World War I drama, Joyeux Noel, though this endeavor feels a bit more contrived and leans heavier on the fictional details than his past effort. World War II and the French exodus during German occupation simply serve as backdrop for the intimate melodrama of a father in search of his son. Even though there is historical information within the film, this is a film that uses real events for its narrative rather than one based upon factual events.

The film begins with German father and son, Hans (August Diehl) and Max (Joshio Marlon), fleeing to France is hopes of peacefully hiding out following the declaration of war. When the national identity of Hans is discovered, he is sent to prison, while Max remains with the locals in the small French village they inhabited. When the German troops entered France in May of 1940, the village makes the decision to flee to the coast rather than await their arrival. Max is taken along for the journey, cared for by Suzanne (Alice Isaaz), the village teacher and his guardian during his father’s absence.

When Hans gains freedom, his only concern is finding his son, while being careful who he trusts along the way. At the same time that Hans is traveling to reunite with his son, Max and the entire village are on a journey of their own. Max leaves notes for his father on the blackboards of school along the way, but their reunion still relies heavily on coincidence and chance. While this makes for good melodrama, it is somewhat of a disservice to the realism of actual atrocities of this period.

Among the contrived plot points is a connection that Hans makes during his journey. While searching for his son in their former village, he comes across a Scottish soldier named Percy (Matthew Rhys), who is the sole survivor in his unit. Separated from safety and his home by the German army, Percy relies on the help of Hans to translate and navigate the familiar terrain. Hans must also utilize the skills of the foreign soldier when encountering conflict that can’t be avoided. Together they travel the dangerous terrain, building a bond between nations along the way.

Come What May might feature a watered down history lesson, but the cinematic elements are on full display. The budget shows somewhat in a CGI-filled sequence involving enemy aircrafts, but much of the film has the feeling of classic cinematic epics, complete with an emotional score by the legendary Ennio Morricone. It is an enjoyable crowd pleaser, though one can’t help but wonder if this subject matter needed a bit more realism and less of the gloss of cinematic manipulation.

Despite lacking the critical acclaim it usually takes to get foreign films noticed, Come What May has been given a surprisingly solid treatment on Blu-ray. Along with a director’s commentary and a making-of featurette, there is also behind-the-scenes footage with Morricone scoring the film, and an interview with Carion by the former director of the Film Society of Lincoln Center. There is also a theatrical trailer.