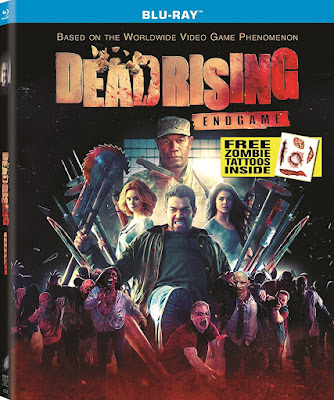 Picking up the story shortly after the end of the last film, reporter Chase Carter (Jesse Metcalfe) is desperately trying to uncover a conspiracy while also hunting for his camerawoman, Jordan (Keegan Connor Tracy), within the quarantined zone of East Mission City. When Chase uncovers a large-scale conspiracy to wipe out all of the people infected with the disease, including those who are controlling it with medication, he sets out to find undeniable proof to bring down the mastermind, General Lyons (Dennis Haysbert).

The decision to destroy all who are infected rather than just those who are actually zombies very transparently works as allegory for Trump’s statements about banning all Muslim immigrants from the United States, to keep out the few that may be potential terrorists. While this is somewhat clever (although not at all subtle), it ends up detracting from the main reason that people play these video games and watch mediocre film adaptations: zombies. Far too much of the film’s first half is more focused on highly dramatic conversations about political conspiracies, which delays the arrival of horror action to the detriment of the film’s ability to entertain.

On his mission, Chase is joined by his latest girlfriend, Sandra Lowe (Marie Avgeropoulos), who also happens to be an expert hacker and bear striking resemblance to the missing character (Meghan Ory as Crystal) from the first film. This is not the only element of Dead Rising: Endgame which feels duplicated from the first film. There is even a long single-take fight sequence near the end of the film, just as the first film had. Unfortunately, it is too little too late, and ultimately Endgame just feels like a lackluster extension of the first film.

The Blu-ray release doesn’t come with alternate ways to watch the film (DVD or digital copy), but it does include a handful of featurettes and a sheet of temporary zombie tattoos. The problem with all of the extras is that they are all a mere minutes long, acting more as padding for the special features section than providing actual information.
Entertainment Value: 6/10
Quality of Filmmaking: 5.5/10
Historical Significance:  3/10
Special Features: 3/10