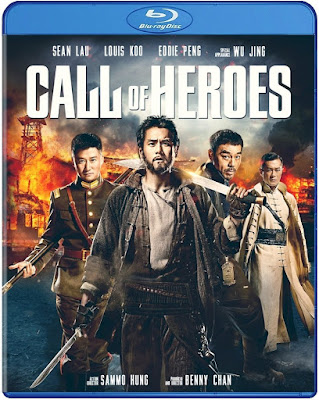 With an ensemble cast of heroes just shy of becoming another “magnificent” seven, the film primarily focuses on three men. The first is the rotten son of a powerful general, Cao Shaolun (Louis Koo), who has begun the practice of murdering entire villages with the help of his soldiers. Tracking down the witness to his latest slaughter, Cao murders a young schoolteacher and two other innocent people in cold blood, confident that the threat of his father’s arrival will be enough for his life to be spared. Ching Wan Lau stars as the second man, Yang Kenan, the village sheriff and polar opposite of Cao Shaolun. He is the moral backbone of the story, unwilling to let the powerful warlord get away with the murders, regardless of who is father is and what the consequences may be. The entire village is in danger of being killed by invading soldiers because of this decision, and there is little hope of being spared even if they were to release him.

The third man at the center of the narrative is Ma Feng (Eddie Peng), a traveling loner who was once a soldier in the Cao army before refusing to be party in the unjust killing. Though the sheriff is rigidly moral and Cao is unflinchingly malevolent, Ma Feng is one character with the ability to change over the course of the film. Despite leaving the army out of objection to the killing, he does not immediately want to take up the futile cause of fighting against them with the villagers. Of course, this inevitably changes and he puts his skills to good use.

The skill that he has is for martial arts, and these are the scenes in which the film excels. If it feels like a completely different movie during the scenes of action, this is because they are directed by martial arts legend Sammo Hung (Benny Chan directs the scenes of dialogue and drama). Expertly choreographed and energetically filmed, these scenes make the film come alive, even if the narrative in between begins to drag. There are a few too many supporting characters, which we learn too little about to carry much significance, and too much space between each of the film’s fights. But when the fighting begins, it is easy to forget about the faults.

The Blu-ray release of Call of Heroes has very little in terms of special features. There is only a simple making-of featurette and a trailer for the film, and not even another format for viewing the film (such as DVD or digital copy). What the Blu-ray does provide is spectacular visuals and sound for the film’s most impressive moments. One of the main heroes uses a metallic whip as his weapon, and the sound of that made the journey through every corner of my viewing room with the help of a surround sound system to utilize the disc’s 5.1 DTS-HD audio.