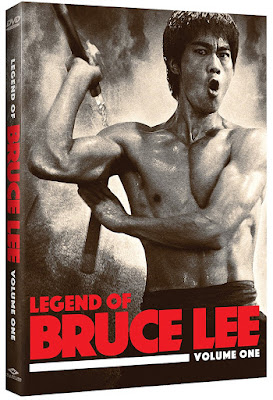 When starting off with such huge handicaps, there is little opportunity for this series to succeed. This is somewhat disappointing, because there appears to be plenty of material from Lee’s life to stretch out into a series. Even the casting choice of Danny Chen (Ip Man 3, Kung Fu Hustle) is spot-on, but all that the series has going for it just feels wasted with these production values. There is plenty of action even in the first episode, if only in the form of awkward street fights as Lee faces British bullies in Hong Kong, but the choreography and cinematography turn each moment into an embarrassment rather than an asset.

Then there are the moments between the badly staged action scenes, which are primarily filled with heavy melodrama. It seems that “Legend of Bruce Lee” has been molded to the soap opera genre. And having this over-the-top style enhanced by bad English-language dubbing is more than even this compelling subject can handle. I would only recommend this DVD set for extreme Bruce Lee fans and those either deaf or willing to watch the series with subtitles and no sound.

The first 10 episodes (out of an eventual 30) are included in this 3-disc set. The narrative follows Lee from his early days as a dancer, to his obsession with martial arts and training with Master Ye Wen (Chenghui Yu). After leaving Hong Kong to study at the University of Washington in America, Lee meets an American girl named Linda (Michelle Lang) and begins training for his first of many karate championships.

Other than the English language dubbing, there are no special features.
Entertainment Value: 4/10
Quality of Filmmaking: 3.5/10
Historical Significance:  2/10
Special Features: 0/10

2. With the exception of a few actors marginal performance, the vast majority of the supporting cast was outright horrendous!

3. Xenophobic propaganda not befitting the Chinese people and more like that of a Cold War propaganda film than a tribute to one of the Greatest Most Beloved and Respected Chinese American figures of all time that should have been used as the opportunity as it was to bring both races together

4. The Direction, Director of Photography and Writers depict the talent of a High School project than actual professionals (I can't believe Netflix was this desperate to actually pay to broadcast this)

5. The Location and Set Directors were so pathetic and this was shot as such a low budget project that any possibility of believing this was a period film ranging in the 1960-1970's when you have 2000+ model year cars driving down the freeway, stock footage using NYPD 2006 police cars in footage meant to be Seattle. The worst Seattle Police Bureau officers and uniforms with "Security Officer" badges and patches, Signage technology that didn't even exist until the mid 1990's

8. Totally inaccurate depiction of American culture, Police, Constitutional, State and Federal laws and procedures. As messed up as the legal system in America might be right now, there is a system.
The Seattle Police remind me more of a Nigerian village police (including that actors themselves) than any law enforcement agency I've seen in the US.

9. Ip Man is coming back from his grave to get you for the horrifically poor depiction of him.

10. Bruce Lee was in no way a perfect human, but what he accomplished in America, for China and it's people, the art of Kung Fu (Wing Chun in particular) and martial arts as a whole deserved this story to be more accurate, more respectful of who Bruce Lee really was, his mannerisms, his family, friends and foes. This version is more fiction than reality.

11. The Stunts and Fight Choreography and skill set of the martial artists and actors skills were nothing short of pathetic.

The fact that this series got more than 1 Star rating is more about the Love of Bruce Lee and how hungry the world is to still watch anything with his name on it 40 years after his early passing.

I have not been this disappointed and saddened by a series that got is so wrong ever.

I thoroughly enjoyed watching the 50 episodes. While there are numerous "out-of-period" glitches, this is the first movie that tells the complete story of his life. I've seen other movies that have "everything perfect" but the story detail that shapes Bruce's mission is missing.