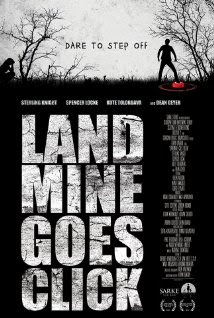 There isn’t a narrative that requires more commitment from the audience to the material than the revenge film. The basic structure always begins with an endurance test of emotional torture forced upon the viewer, typically with relentless physical abuse on an undeserving victim. Without this connection, the justification for revenge would not be prevalent, and the purpose of the genre seems to rely upon the audience’s participation in the primal urge for vengeance. Landmine Goes Click succeeded in dragging me along on this affecting journey through the emotional ringer, with the help of Levan Bakhia’s confidence as a director and the raw commitment in the performances of his cast.


Landmine Goes Click blends a revenge narrative with the travel-based horror film, which has become a consistent sub-genre since the success of Eli Roth’s Hostel. Taking place in his home country of , Bakhia may not be doing much for the tourism business with his film, but his contribution to the revenge genre is undeniable. Wisely controlling the scope of the narrative, Landmine Goes Click remains focused on a limited cast of characters, including three traveling Americans we are introduced to with an ingeniously designed opening sequence of overhead shots following their vehicle, echoing the opening to Michael Haneke’s Funny Games. These three tourists include engaged couple Alicia (Spencer Locke) and Daniel (Dean Geyer), along with their close friend and obvious third wheel, Chris (Sterling Knight).

Chris clearly has feelings for his best friend’s fiancé, leading him to feel an obligation to protect Alicia when circumstances begin to spiral out of control. The initial horror of the situation begins when Chris inadvertently steps on a seemingly active landmine in the remote hills of , unable to move without the threat of injury and/or death. As Alicia scrambles to find a way to free Chris from forced self-confinement, the situation is made worse when a devious local named Ilya (played spectacularly by the late Kote Tolordava) stumbles on the dramatic scene.

Despite his constant assurances that he only wants to help the couple in their hopeless situation, it quickly becomes apparent that Ilya only intends to use their despair in a series of sick games. Knowing that Chris is handicapped by immobility, Ilya focuses his attention on Alicia, circling her like a predator toying with wounded prey. Before long, both Chris and Alicia realize that they were far better off without the type of help that Ilya is offering.

So much of the narrative relies upon the simple cat-and-mouse battle of wits between victim and aggressor that the success of Landmine Goes Click depends upon the performances from the limited cast members, including two breakout adult roles for actors best known for their work as children and a magnificent final role for Tolordava. The casting of Knight in the role of Chris placed a great deal of pressure on the former Disney Channel star, recognizable for his work in family entertainment and sitcoms rather than genre work such as this. While I spent the first half of the film adjusting to Knight playing a role void of the type of comedic relief I have come to expect from him, I was blown away by the time the final shot had concluded.

As spectacular as Knight’s dramatic turn was in conveying the absolute horror of the situation, it was Spencer Locke who gave the film its emotional core. Locke also spent some of her youth working on Disney Channel shows, though she has the advantage of also being well versed in genre films, most notably playing the reoccurring role of K-Mart in the successful Resident Evil franchise, based on the series of horror video games. Last year I had the opportunity for an exclusive interview with filmmaker Paul W.S. Anderson, and I’m kicking myself for not asking him about Locke. After watching her brave yet vulnerable performance in Landmine Goes Click, I can’t imagine her career leading to anything less than greatness.

I was lucky enough to speak to Locke after the screening of the film at Shriekfest in last weekend, and it took everything in me not to rush up and hug her after the film. Though this is partially due to the relentless conviction that Bakhia took in filming one of the most difficult scenes with unflinching determination to make the audience uncomfortable with long takes, the effect would have been pointless without Locke’s unfaltering dedication to the emotional stakes of the situation. As a performer, a film critic, and as a lover of cinema, I was absolutely floored by the emotional response that Locke was able to achieve without ever slipping into the cliché trappings of playing the victim. This is one young actress I will most definitely be watching out for in the future, with talent to match her undeniable beauty.

Landmine Goes Click is not by any means a perfect film, showing repetition in dialogue when the plot is backed into a corner, and containing one of the most unendurable sequences unnecessarily stretched out beyond reasonable levels of discomfort for the audience. Nor does it cover any particularly new grounds with its revenge narrative, calling to mind classics such as Sam Peckinpah’s Straw Dogs and Wes Craven The Last House on the Left, but Bakhia makes up for the lack of story creativity with daring and unique stylistic approaches. He may not have surpassed the master filmmakers in this subject, but Landmine Goes Click stands strong among them as the filmmaker’s sophomore feature. Personally, I am eager to see what is next from this Georgian filmmaker.