New Doctor Who on Blu-ray and DVD 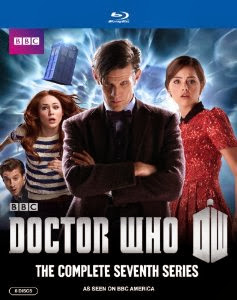 Season seven of the latest revival of Doctor Who was previously released in two divided packages, but now the complete season is available in this set along with two Christmas specials. Fans must have patience with their Doctor Who purchases, but those who did not rush out and by the episodes in the separate box sets now has the option of getting them all together, with new commentary tracks and other special features.

This four disc set begins with “The Doctor, The Widow and the Wardrobe,” which is the Christmas special that was widely loathed by fans. The special is actually about Christmas themes, rather than just being set during the holidays. Comparisons can be made to the previous year’s adaptation of “A Christmas Carol” in the Doctor Who world. If you disliked that one, Season Seven’s Christmas special will likely leave a bad taste in your mouth. They do their best to make up for it with the opening episode, “Asylum of the Daleks,” giving a plethora of the fan-favorite monsters.

This series has always been on the sillier side, though the humor and camp seems even more amplified in the new series. Matt Smith is the fifth doctor in this revival referred to as “NuWho” by the franchise’s dedicated fan base. Season seven has fifteen total episodes, fit onto four discs with a number of special features. There are only a handful of commentaries, which may disappoint some fans, but there are also plenty of featurettes with behind-the-scene footage. 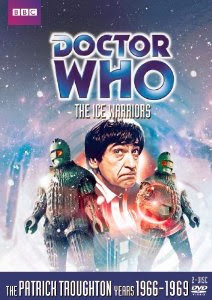 Doctor Who: The Ice Warriors

As fans of the classic “Doctor Who” love to incessantly lament and bemoan over, this long-running series which has surpassed any other science fiction television show ever aired is historically incomplete for future generations. In an infamous purge of old film and television content, the BBC destroyed many of the only existing copies of “Doctor Who” episodes in the 1970s. As a result, there are gaps in what fans now have available. In some cases, bits of the puzzle have been compiled through near-miraculous discoveries in personal collections.

“The Ice Warriors,” which was Patrick Troughton’s third storyline as The Doctor, was among the destroyed episodes until 16mm prints of four out of the six were discovered in the 1980s. Episodes two and three still do not exist, making this somewhat of an incomplete collection. The best possible efforts have been made to keep the story alive with the audio files preserved and this collection’s animated presentation of these missing episodes.

Despite the missing elements, there is no diminished treatment of this storyline in the DVD release. With the usual plethora of special features to go with the classic television, it seems that no other program from the 60s receives this much attention. There are commentary tracks on the four original episodes, as well as one of the animated ones. There is also a behind-the-scenes look at the creation of new visuals for the lost sections of the story, not to mention a photo gallery and PDF production material, all included in this two disc set. 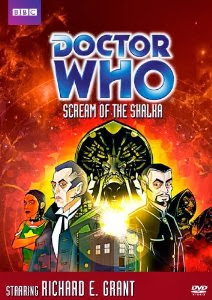 Doctor Who: Scream of the Shalka
There is so much of a Doctor Who craze going on these days that it is hard to remember the period before the new series had revived interest in the long-standing British sci-fi series. Prior to the 2005 return, this animated story was an attempt at breathing new life into the beloved character. Richard E. Grant lent his voice to an animated Doctor, the ninth doctor in a continuing line of time-and-space traveling aliens.
Originally broadcast on the internet, this is not a headlining Doctor Who feature. The highlight of this package merely comes from the fact that it was previously unavailable, as plans to release it were cancelled after interest in the franchise moved elsewhere. Despite minimal impact, there are plenty of special features on the disc. Paired with the animated feature is an audio commentary track with writer Paul Cornell, director Wilson Milam and producer James Goss. There is also a making-of featurette, archive interviews, and a history of the BBC website which debuted this feature.
Entertainment Value: 7/10
Quality of Filmmaking: 6/10
Historical Significance: 5/10
Disc Features: 9/10

^ Ice Warriors was Troughton's 10th story (but 3rd in the 5th series).