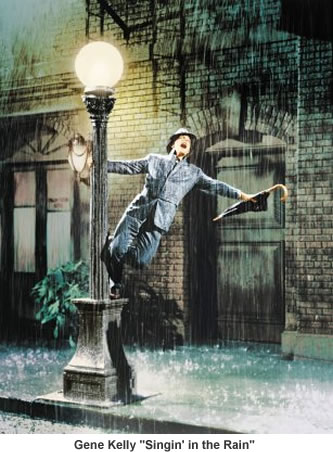 I never much cared for Woody Allen when I first discovered his films. I must have been around the age of 15. It was at this time that I was assembling my concept of a romantic love, mostly through the endless absorption of idealistic presentations in film romance. I sought out the best and most popular romances that the world of film had to offer, in search of my own map for a love life. When I reached Annie Hall (1977), I found most of Allen’s humor too cynical for the innocent ideal of my youth. At the age of 30, a viewing of Annie Hall brought a wonderfully different film experience.

There were two things that I recall liking in the early Allen films that I watched at in my teens. The first was the line in his aforementioned classic about masturbation being “sex with someone I love.” As I said, I was fifteen. The second thing which won me over to the filmmaker on some small level was within the storyline of Crimes and Misdemeanors (1989). Allen’s character, Cliff Stern, is a documentary filmmaker with the same neurotic and cynical attitude about love which turned me away from Alvy Singer, and yet it was within this film that I began to appreciate the Woody Allen personas. This is completely due to the fact that Cliff owns only one 16mm print, and that film is Singin’ in the Rain (1952), and the passionate way he talks about watching the beloved musical. It is impossible to be a complete cynical and love Singin’ in the Rain as much as Allen clearly does.

A shared love of the same pop-culture piece of art has a way of bringing people together. When you first start dating someone new, these are usually among the first questions asked during the ‘getting-to-know-you’ portion of the relationship. What is your favorite book? What kind of music do you listen to? What are your favorite movies? Even if we have little else in common, this shared love of the same things can bridge that gap. Musicals tend to have the increased emotional attachment, due to the manner in which music seems to speak volumes in sentimentality. Indeed, each of the films on my list are movies connected and intertwined with memories of my youth and my life thus far. Not one of these films has been watched just once, or even just a couple of times, but are films which I have already carried with me. There are no storm clouds in my life which can’t be momentarily cleared away by a little Singin’ in the Rain.

This past weekend, Brian Herzlinger released his original comedy musical, How Sweet It Is. Discussing classic musical influences on his modern musical, Brian inspired me to think about my personal favorites. This may be the easiest list I have compiled, because all I have done is chosen the films I have watched since childhood without ever finding them tiresome. It isn’t the most unique list, but sentimentality has no need for originality. 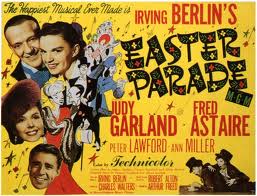 I have seen Easter Parade at least twenty times. Probably closer to 30. My family watches it every Easter, and I even once asked to view it in a class about film musicals in grad school. Despite the countless times I was forced to endure the pastel and lace aspects as the storyline as an unwilling teen, I never once tired of watching Fred Astaire. Though this isn’t my favorite of his films, the pairing with Judy Garland is magic and the toy shop scene remains among my favorite of Astaire’s routines.

The tagline for Irving Berlin’s musical was “The Happiest Musical Ever Made,” and it is true that much of the film is just light entertainment. Many of the musical numbers are just creative performances onstage, which provide entertainment and filler for the film. The storyline is simple, similar to the plot of My Fair Lady with a show business twist. This is mostly just a film about performances, and that is more than enough with these entertainers. 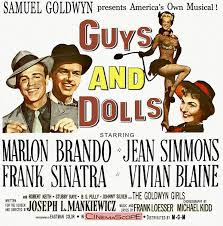 Marlon Brando never struck me as the type to be in a musical, but that is exactly what the musical Guys and Dolls needs. It needed tough looking actors unlikely to be seen singing and dancing. The addition of Frank Sinatra makes it a killer combination and one of the best musicals to ever come out of . This film was adapted from the Broadway musical and it features some of the same cast. Sky Masterson (Brando) and Nathan Detroit (Sinatra) will bet on anything when they are out of the racetracks. When trying to get some quick cash, Nathan bets that sky can’t seduce the new missionary (Jean Simmons) that just moved into the neighborhood. As often happens in the movies, they fall in love and all ends in a song.

The production and the casting choices are almost as fascinating as the film itself, especially the various stories behind the rivalry Sinatra and Brando had on set. There was some contention over the fact that non-singing actor Brando was given the larger role in the film, one which Sinatra much preferred to the one he was given despite the extra title song added for his presence in the film. Brando’s response was practical jokes, such as intentionally flubbing lines to ensure repeat takes of uncomfortable scenes. However difficult it was to cast this film, and however tense the production was, the results are fantastic. Who cares that Brando’s vocals for the musical numbers needed to be spliced together from several different takes? Somehow it worked out, and Sinatra moved on by performing “Luck Be a Lady” onstage for years to come. Now we think of him when we hear that song, not Brando. 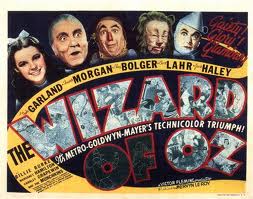 This is one of the most memorable films of all time, and it would be difficult for anyone to claim that they made it through their childhood without seeing it on television at least once. Not only has The Wizard of Oz claimed a home in the hearts of many for generation after generation, but it has also been given a place in film history. Growing up, it was an event if we turned the television on and discovered that The Wizard of Oz was playing. Even though it was available on VHS, there was something special about knowing this film was a constant. Because of the high number of times it appears on television, studies have shown that this is the highest watched film in history.

Because of this, I imagine most everyone is familiar with the story and all of the wonders it has to offer. This is another film with a great deal of drama within the production, and that can be fascinating as well. Personally, I just love this film for purely nostalgic reasons. It is far from a favorite film of mine, but watching it brings me back to childhood on some small level. I never saw the new Oz film. Walt Disney was furious when MGM had the rights to the beloved book series, and the Disney studio has made several sequels and sub-par rip-offs ever since. I’m sure there is some merit to the new Oz film, but nothing will ever compare to the classic. 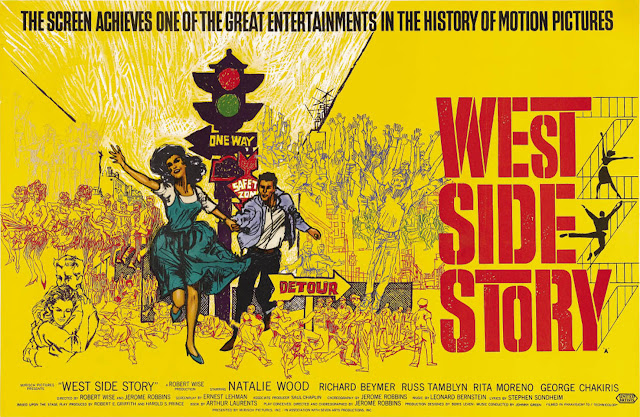 West Side Story was the first musical I saw onstage, and immediately following it became the first musical I saw on film. The dance turned into fight immediately made an impression, as did the fantastic songs which fill the musical score by Leonard Bernstein and lyrics by Stephen Soundheim. Winner of 10 Academy Awards, including Best Picture, this film version of the classic musical is one of those rare films which are as good as they are memorable.

Taking Romeo and Juliet and updating it to 1950s with music, West Side Story is about the forbidden love between two members of rival gangs. The Jets are a group of white thugs and The Sharks are the Puerto Rican gang members in the neighborhood, and both constantly fight each other. When one of the Jets (Richard Beymer) falls in love with one of the Sharks (Natalie Wood), they think that they can find a way to be together, but the tragedy of the rivalry takes over. This colorful winner of Best Cinematography, Best Art Direction and Best Costume Design is a vibrant film, and also one with an emotional punch within the storyline. 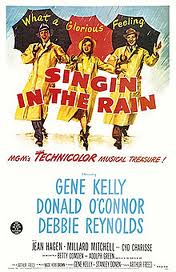 Singin’ in the Rain follows the advent of sound in motion pictures, and the rippling effects it had in , complete with a reenactment of the most memorable moment of The Jazz Singer (1927). Gene Kelly stars as a silent film star who is forced to reinvent himself when sound becomes a demanding necessity for modern audiences. There are many scenes showing an accurate and comical portrayal of the switch to sound filmmaking, including a particularly memorable sequence in which the microphone is unsuccessfully hidden in numerous locations on set.

The film within the film is a mess in test screenings, mostly because of the awful sound, including a leading actress with a shrill and uncivilized voice that doesn’t match the audience’s expectations after seeing her elegant beauty in countless silent films. These were problems that were actually dealt with in the early days of sound, with countless foreign actors suddenly out of work because of their troublesome accents. Singin’ in the Rain utilizes this chapter in film history to advance the storyline, advancing the plot towards a solution that turns the flop into a successful musical, with up-and-coming actress Kathy Selden (Debbie Reynolds) lending her voice to dub over the voice of irritating film starlet Lina Lamont (Jean Hagen).

As well as Kelly’s signature over-the-top fantasy finale number, Singin’ in the Rain has some fantastic smaller bits as well. I have always loved “Make ‘Em Laugh,” which Donald O’Conner so enthusiastically performs in the role of Cosmo Brown. And there is no denying the simple elegant spectacle of the title number. Who hasn’t hummed that tune walking down a rainy street filled with puddles? Seriously, I can’t be the only one.

West Side Story is a fantastic and beautiful musical that I never, ever get tired of seeing. It's a classic that never grows old, and it's my all time favorite movie, hands down! Here's hoping that West Side Story takes the number one spot one of these days!!

Singin' in the Rain may very well be the movie I have seen the most times without it ever losing any magic. I hesitate to say it is my favorite movie, but it is close, so I don't foresee any change in the future. If it is any consolation, however, West Side Story is the only film to come even close and will never be lower than #2.