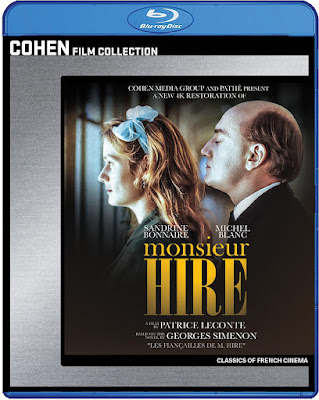 Based on the novel Les Fiançailles de M. Hire by Georges Simenon, Monsieur Hire is a 1989 French crime film directed by Patrice Leconte with a precise touch. The simplicity of the story is layered with excellent filmmaking that only improves with repeat viewings. The characters are complex and layered with ambiguity, leaving audiences with something of a puzzle even after all has been revealed. Comparisons to Hitchcock are not undeserved.

With clear connections to Rear Window, the film follows title character Monsieur Hire (Michel Blanc), an isolated bachelor who doesn’t care much for human interaction but does enjoy watching an attractive woman named Alice (Sandrine Bonnaire) who lives in the apartment in the building across from him. Able to see into her apartment, Hire becomes obsessed with her, which allows him to obtain private details about her life and relationship with a petty criminal named Émile (Luc Thuillier).

When the body of a young woman is discovered near his home, Hire remains quiet about the details he has, despite becoming a suspect himself. At the same time, Alice becomes aware of her spying neighbor, and makes an effort to make contact with him. After initially resisting this, Hire is tempted into increased interaction with his neighbor and the subject of his fascination, despite the risks that come with the relationship.

There isn’t a great deal of plot in Monsieur Hire, but that just allows Leconte to focus on the filmmaking. With a spectacular attention to detail, there are layers found in the visual storytelling that enhance the ambiguity of the dialogue. Expertly shot and edited, Monsieur Hire is a thriller that doesn’t necessarily go in unexpected directions, but still manages to offer the viewer plenty of surprises.

The Blu-ray release of Monsieur Hire from the Cohen Film Collection has a new 4K restoration of the film, allowing for even better appreciation of the filmmaking. There is also a new interview with Leconte and star Sandrine Bonnaire in the special features. The extras also include an audio commentary by film critic and DigiGods podcast host Wade Major, along with trailers.