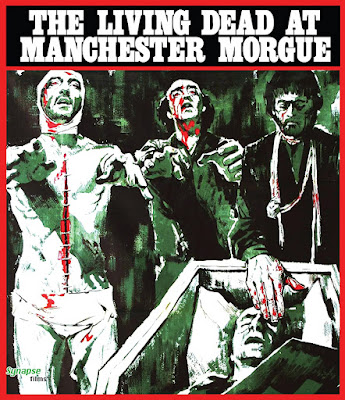 When George A. Romero brought the zombies into the modern era with a revision of the monster’s characteristics, the horror sub-genre was popularized in countless other countries. Long before Shaun of the Dead, The Living Dead at Manchester Morgue was set in England, a Spanish/Italian horror movie with clear influence from popular American zombie narratives. While it doesn’t stand up in comparison to some of the great zombie films, The Living Dead at Manchester Morgue has a place in the sub-genre’s history.

When an antique shop owner named George Meaning (Ray Lovelock) travels to the country to meet friends, his motorcycle is wrecked after a small accident with Edna Simmonds (Cristina Galbó). George misogynistically takes control of Edna’s car, insisting she provide him transportation for her mistake. As the pair travel into the English countryside, they come across a group of scientists using a machine dispersing ultra-sonic radiation to kill all of the insects in the farming community. What they don’t realize is that this experiment is also capable of bringing the dead back to life.

As George and Edna come across the zombie threat, they do their best to warn the locals of the threat. Unfortunately, despite the real threat of the undead spreading the surrounding area, a stubborn detective (Arthur Kennedy) believes George and Edna are responsible for the carnage caused by the zombies. This plot trope can be more than a little frustrating, and also keeps the zombie violence relatively contained, but there are still a few memorable sequences in The Living Dead at Manchester Morgue.

The Synapse Films Blu-ray release contains a presentation of the film from a 4K restoration of the original camera negative. The original theatrical mono mix and credit sequences are also intact. Additional special features on the disc include the following:

That's why you'll be able to|you possibly can} safely depend on our evaluations and belief the operators we evaluation on our web site. Your private security is of main importance when half in} at a casino site. Look for the 바카라사이트 licence numbers of each operator at the footer. Join right now to remain up to date in your states gambling news and presents.