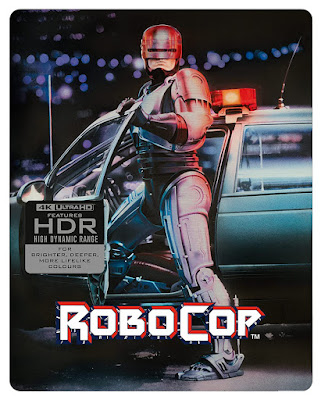 Robocop is the kind of movie that makes me nostalgic for the 1980s, with bold filmmaking less concerned with reaching the broadest possible audience than blockbusters of the modern era. Director Paul Verhoeven pushed the boundaries of what would even be considered acceptable for an R-rated film, while the 2014 remake of Robocop was safely contained in a PG-13 rating. Beyond the edginess of this 1987 sci-fi action film, Robocop is a marvelous display of technical prowess in filmmaking. The practical effects remain impressive 35 years later, and the satirical elements of the story still have relevance today.

Set in a dystopian near-future Detroit, Robocop follows police officer Alex Murphy (Weller) after he is murdered by a gang of criminals and turned into a cyborg law enforcer by megacorporation Omni Consumer Products. At first Robocop has no memory of his past life, though interaction with his former partner Anne Lewis (Nancy Allen) bring back fragments of memories. Later sequels would explore this further, but the first Robocop is a simple story with impressive set pieces and action sequences.

Robocop feels like the type of movie that would never get made today, but even in 1987 there were edits needed to avoid an NC-17 rating. As a result, there are now multiple versions of the film, all of which are included in this 2-disc limited edition steelbook release. Along with the original theatrical release, also included is the unrated director’s cut and an edited-for-TV version. Both the theatrical and director’s cut of the film are included on two 4K UHD Blu-ray discs with Dolby Vision and original lossless stereo and four-channel mixes plus DTS-HD MA 5.1 and Dolby Atmos surround sound options. The film was given a 4K restoration from the original camera negative in 2013, approved by director Paul Verhoeven.

The steelbook release also comes with a 44-page collector’s booklet which has new writing on the film by Omar Ahmed, Christopher Griffiths and Henry Blyth, along with production photography. Blyth’s essay goes into the specific differences between the various cuts of the film included in the set. Additional special features are included on each of the discs: