Only the Animals Blu-ray Review 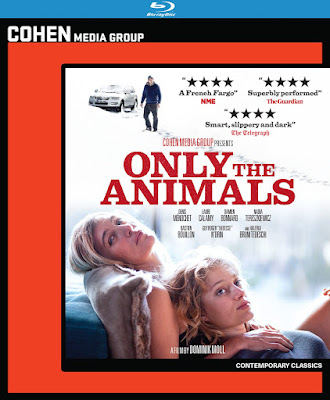 Based on Colin Niel’s novel of the same name, Only the Animals (Seules les bêtes) is a simple tale, despite taking place across several countries with various seemingly unrelated characters. Director Dominik Moll keeps the audience in the dark regarding the connection the various storylines have with each other, revealing them only after the tension has been built up. Each piece of the puzzle eventually falls into place in a way that feel inevitable, despite the initial disorienting introduction to each moving part of the narrative.

The mystery at the center of Only the Animals is split into sections, each one providing more information by tying the narrative to one character. As each character’s perspective is revealed, so are significant elements of the narrative. After a brief dialogue-free prologue in Africa, the film starts with the narrative as seen through the eyes of Alice (Laure Calamy). Alice is married to cow farmer Michel (Denis Ménochet), though she is having an affair with emotionally distant sheep farmer Joseph (Damien Bonnard).

On her way home from visiting her lover, Alice sees the abandoned car belonging to Evelyne Ducat (Valeria Bruni Tedeschi), a local woman who has mysterious gone missing. When the perspective shifts to Joseph, details about Evelyne’s location are shown, though how she got there is only revealed in the final segment. The disappearance is also indirectly tied to several other characters, including Alice’s husband Michel.

While Alice is busy with Joseph, Michel has marital secrets of his own, involving a young woman named Amandine (Juliet Doucet). This is all a part of a complex scheme carried out by Armand (Guy Roger N'Drin), an impoverished man in Africa looking to raise money to win back his former girlfriend and the mother of his child. At the same time, a young French woman named Marion (Nadia Tereszkiewicz) becomes entangled in several storylines after having an affair with Evelyn. How each of these moving parts come together becomes clearer at a certain point, though the enjoyment of the film is the way Moll slowly reveals key information along the way.

Despite the enjoyment of the mystery slowly being revealed over the course of the film, Only the Animals does suffer slightly from what has been left out. Even with nearly a two-hour run-time, there are too many characters to provide satisfactory backstories, making some their actions feel inexplicable. The tone is also somewhat noncommittal, never embracing the humor of the absurd or the tragedy of the melodrama. It is difficult not to long for more, especially with all that is effective within the filmmaking. Instead, the narrative ends up feeling as coldly distant as the snowy setting.

The Blu-ray release for Only the Animals doesn’t come with any special features to mention. The high-definition Blu-ray does give the best possible presentation of the film, especially in the wider shots of the natural surroundings of the French countryside the film mostly takes place in. However, this may not be enough to warrant an upgrade from DVD.