Ottolenghi and the Cakes of Versailles DVD Review 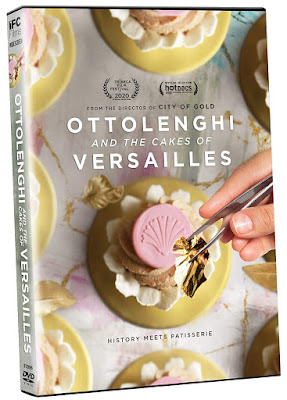 I think my biggest mistake in the expectations I had from Ottolenghi and the Cakes of Versailles comes from the knowledge that director Laura Gabbert previously directed City of Gold, a documentary I love. While City of Gold was about a man, however, Ottolenghi and the Cakes of Versailles is about history and an event celebrating it. In premise alone, there is more of an emotional disconnect between the material, and it doesn’t help that a movie about sumptuous culinary artistry ends with discussion of Marie Antoinette’s death.

Though we are given a history lesson along the way, the basic premise of the film is an event at the Metropolitan Museum of Art in New York celebrating the decadence of the food from the age of Versailles to life. This recreation of an era famous for indulgence and spectacle proves the perfect challenge for a team of chefs that Yotam Ottolenghi puts together after searching Instagram for the most innovative dessert artistry. Among these are some famous names like Dominique Ansel and Dinara Kasko, but fame and ego never seem to be a part of the event, as they work alongside some relatively unknown chefs.

If you are interested in this documentary because of the potential to see self-indulgent and over-the-top cakes and pastry, there is plenty of food porn to satisfy. At the same time, Ottolenghi does attempt to provide a bit more depth in the discussion of history, breaking away from the preparation of food several times throughout the film, despite the short run-time. While there are some interesting facts in there, the strength of the film remains with the details of the event itself. Watching the individual chefs problem solve in the kitchen may lack historical context, but it is endlessly more engaging than photos of the gardens of Versailles.

Ultimately, however, I imagine nearly everyone who has a desire to watch this film, whether to see the difficulty of pulling off the event or to learn about the history, will be most impressed by the food itself. While there is an effort to celebrate the history, the chefs are given the freedom to update and add their own signature to classic methods. The results are staggeringly artistic, from a whirlpool of cocktails to a moving swan pastry and the fanciest jello shots I have ever seen. Some of the accomplishments are so beautiful and creative that eating them seems secondary, though that certainly doesn’t stop those attending the event.

The DVD doesn’t have much to offer beyond the film itself.