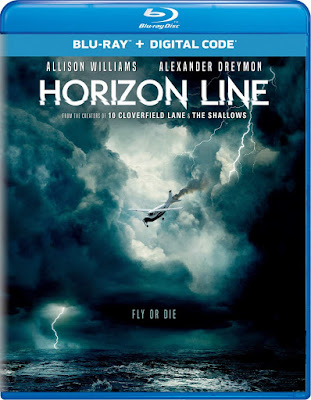 Simple survival stories can be extremely effective in cinematic form, but it is all about execution. The suspense and intensity of the sequences of survival are the essence of the narrative, and there isn’t much to fall back on if that doesn’t work. Horizon Line contains all of the expected twists and turns of a survival story, but I couldn’t have been less involved. Every moment felt rote and obvious, and I was just waiting for the next predictable moment to arrive.

The uninteresting characters at the center of the narrative didn’t help to keep me engaged. We first join Sara (Allison Williams) on her last evening of a year-long personal sabbatical which she has seemingly spent drinking rum on an unnamed tropical island. Keeping her company is Jackson (Alexander Dreymon), who is another model-looking white person who has taken the island as his home. Never mind the fact that the film takes place on an African island, we will focus on these privileged white characters for the majority of the narrative.

Despite having become close, Sara disappears on Jackson without so much as a goodbye, returning to her life until she is invited back to the island for a wedding a year later. As if we are expected to be invested in this relationship which clearly meant little to Sara, the first portion of the film is focused on their reunion. The fact that Sara even blows off her bride friend to hook up with Jackson makes her that much less likeable.

Not caring about the characters left little reason to be invested in the suspense that followed. After both of these inconsiderate wedding guests miss the only ferry to the island where the wedding is taking place, both Jackson and Sara (separately and non-comedically) charter the same plane flown by a local named Freddy Wyman (Keith David). Amiable as Freddy is, he has a heart attack in the middle of the trip, forcing Sara and Jackson to navigate on their own in a conveniently damaged plane. Every imaginable problem occurs, just to try and drum up a little suspense, but very little has impact after giving us multiple reasons not to care about the characters in danger.

The Blu-ray release of Horizon Line comes with a code for a digital copy of the film. The disc itself contains a handful of deleted scenes, but I had little desire to watch more from these characters, and the best of the predictable suspense was put into the film.