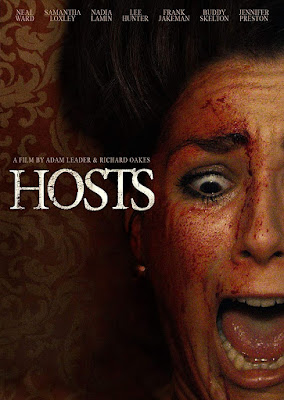 Mood and atmosphere can be crucial with lower budget horror filmmaking, especially when making up for shortcomings in other areas. Hosts understands this well, with a few truly horrifying moments that are executed with an understanding of how to make the budget work for you. And for these brief moments, I commend Hosts. Unfortunately, nearly every aspect of the storytelling beyond the atmosphere and moments of violence fail to impress. In fact, while some elements of the film are stellar, others are equally unimpressive.

The film premise plays out like a typical home invasion thriller combined with an Invasion of the Body Snatchers narrative. There is nothing more complex or layered than that, and that is the biggest problem. We don’t care about the characters as they have been written, and most of the actors are unable to match the realism of the violence with their stilted performances.

The film begins with a couple preparing to visit their neighbors for a Christmas dinner before suddenly becoming possessed by an otherworldly light. You might expect their neighbors to notice the change in their behavior, especially since the actors play it as though they have become obvious inhuman in their responses. But instead the family just continues the festivities as usual, until forced to acknowledge that something is wrong. This moment comes suddenly and shockingly, and also seems to be what the entire film is built around. While this is a very good sequence, I would be hard-pressed to remember much that happened before or after it.

The biggest problem with building the first half of the film off melodrama is the shortcomings in the dialogue and acting. It is hard to care about these characters, because they barely resemble real people, and this makes the violence of the film far less impactful. I can only imagine if the film’s strongest moments had been placed in a better film.

The DVD for Hosts comes with a Behind-the-Scenes featurette and interviews with key cast and crew. These may help to have a better appreciation of the filmmaking, but they certainly didn’t make me love the film any more.