The Trip to Greece Blu-ray Review 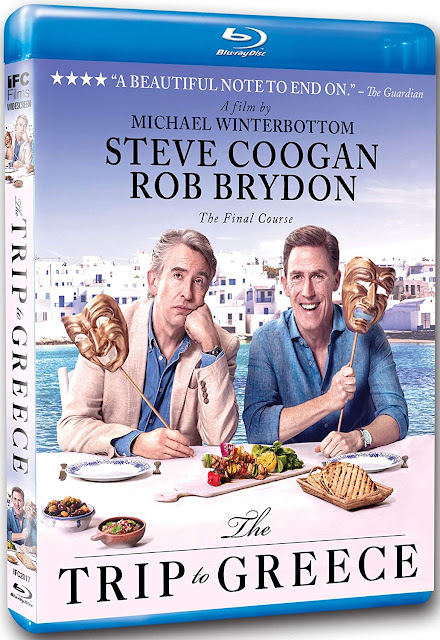 In a scene near the end of The Trip to Greece, Rob Brydon remarks that it has been ten years since the first trip he took with friend and adversary, Steve Coogan. This is surprising to Coogan, as it may also be to audience members that have been following their journeys to beautiful scenery and expensive meals. The breezy irreverence often seems to main selling point of the series, which sets the dramatic character development behind overlong scenes of competing celebrity impressions and two men never afraid to talk with their mouths full, if it means they get to hog the spotlight. That this is the supposed last installment in the franchise doesn’t bring with it the promise of any grand revelations or resolutions, but simply another serving of the same.

With six days to trace the journey of Odysseus from Troy to Ithaca, Brydon and Coogan take their usual stops at historic/tourist locations, and Greece provides plenty of them. When they aren’t having competitive conversation or proving their individual worth as comedians over exorbitant meals, they do the same in front of recognizable Greek landmarks, such as the Temple of Apollo at Delphi, the Ancient Theater or Epidaurus (where they have a signature costumed photo shoot), the Caves of Diros, and Ancient Stagira, among many others. There are just as many restaurants visited, though none of the names of which I am familiar.

The restaurants, and subsequent food, are always of the high dining variety. This often means food porn cinematographic shots of the food being prepared, as well as presented to the celebrities, who are always willing to take at least a moment away from constantly boasting to give the appropriate praise with presentation and first taste. The schtick is more familiar after four films, but hasn’t completely lost its charm, even if it often feels as though the series has worked increasingly hard to put other people at the table with the two combative friends. Perhaps they are looking for an excuse for the men to compete, or just some variety, though they usually serve as little more than silent audience to the Brydon and Coogan show.

Director Michael Winterbottom has led the charge for each film in this highly improvised series, and often seems to model them after a more irreverent approach to Richard Linklater’s Before Sunrise series. Though it is the lighthearted nature of the comedic banter than distinguishes these films, they also carry a somber undertone, especially as we see these men grow older but no less restless. Even in Coogan’s recent critical success (which is makes mention of several times throughout the film), he is still facing numerous obstacles, in his career and his personal life. If life is a little easier on Brydon, that’s because it always seems to be in these films. Perhaps it no different, but he hides it behind a goofy demeanor, while Coogan gladly wears his contempt on his sleeve.

Enjoyment of the past films is reason enough to see The Trip to Greece, though not necessarily for any need to witness resolution to any narrative. The film franchise has always been slice-of-life in nature, and continues that to a slightly ambiguous end, though not one nearly as random or tongue-in-cheek as The Trip to Spain. It is an all-around enjoyable trip, even if it ultimately blends in with all of the others. Perhaps it would have been helpful to distinguish if so many of them hadn’t been to seaside tourist hotspots.

The Blu-ray gives more detail and range to the visual appeal of the scenery and meals, but the disc itself provides no special features.