The end is finally here for the Skywalker saga of Star Wars. Now that Disney owns the franchise, there are sure to be plenty of other Star Wars stories to tell, both on and off the big screen. But for many fans, this is the end of a storyline that has continued (more or less) for over four decades. This means the return of several iconic characters (Carrie Fisher is given top billing for a couple of lines and knowing looks), many answered questions (Rey’s identity chief among them), and a lot of satisfying action. The real question for many fans will not be whether or not they will see The Rise of Skywalker, but how many times, and in what format. For those who are looking for a completely immersive experience, there is no better choice than 4DX. Having previously compared the film-viewing experience to the Star Tours ride at Disneyland, it was fitting to finally see that comparison blend into one ride of movie. And for those who have never experienced the format before, The Rise of Skywalker is the ideal first film given how much time and attention has been given to every detail. Few films utilize as many effects as often as this film, which I will discuss in greater individual detail below. 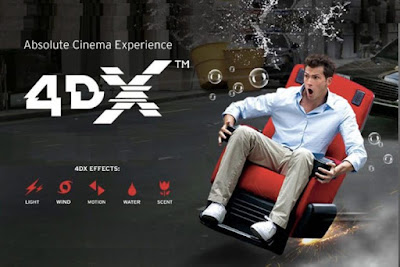 It is important to note that the effects available at each 4DX location can vary. There are basic movement effects that are found at all theater chains equipped with 4DX, but not all theaters have all of the effects. While doing a little research about your particular theater of choice before buying the ticket may be a good idea, I have found Regal to be a fairly reliable exhibitor of the 4DX technology. Also, this review is primarily focused on the evaluation of these effects, while evaluation of the quality of the film itself has been saved for another review.

Effect 1: Motion and Vibration
Easily the most recognizable element of the 4DX experience is the seats that move and even vibrate to simulate experiences onscreen. This is easily comparable to the Star Tours experience (or the new Millennium Falcon ride, I suppose), especially during the sequences in which the seat movement works to simulate riding inside the spaceships. But that is just the beginning of the ways that the film is able to use the seat movement and vibration. There is an assortment of different vehicles that we take a ride on over the course of the film, both in the air and on land.

The one surprising element came with the use of the vibration feature. The vibrating seats are often used to simulate the rumble of engines while riding in an assortment of vehicles (it was particularly realistic in the 4DX presentation of Ford v Ferrari), and The Rise of Skywalker is no exception. But in addition to this, the vibrating feature was used effectively for impact whenever a lightsaber is used. The power that emanates from the plasma blades can literally be felt whenever they are turned on, but the vibration is amplified even more as the battles ensue.

There was also one somewhat unsuccessful instance when the vibration was used to simulate the footsteps of Stormtroopers, but the amount of vibration didn’t seem proportional to the impact of the footsteps. Instances like this can take you out of the film experience, but there were far fewer of them in The Rise of Skywalker than past film viewings.

Effect 2: Back Effects
Similar to the vibration of the seats, there are also slight intrusions from the back of your seat. I call them intrusions not to associate them with a negative experience, but because the back effects are often intentionally jarring. The back effects will gently (or not so gently, in the case of John Wick 3) nudge and prod you during key sequences. This is typically during a fight, to simulate (again, gently) the feeling of taking a hit, or hitting the ground after an impact.

The biggest issue with this effect is a matter of association. When watching a movie, we most often want to associate with the heroes. So when John Wick takes a punch and we feel the hit, it brings us closer to empathize with the protagonist. When The Rise of Skywalker uses this effect, however, it is often when one of the random Stormtroopers takes a big hit. This connects us to them, rather than the heroes that delivered the blow, which is a bit confusing. With that being said, the back effects are only moderately utilized for this film, and the intensity seems to have been decreased for younger audience members.

Effect 3: Air Blasts
The air blasts are bursts of compressed air that are shot at the viewer from a number of different locations, and to different effect. The ones that come from the front are often used for surprise effect, similar to the way 3D might use objects seeming to protrude from the screen to reach out to the audience. The difference is that the air actually makes contact. However gentle it may be, this always has an impact. Less obtrusive but just as effective in the immersive experience are the bursts that come from the headrest. These bursts are often just to the side of your head (although a few of them hit me pretty dead on) to simulate plasma shots and other items as they whiz past you. Along with the seat movements, this effect helps to feel like you are in the middle of the battle (and this film has quite a few of them). If I were to compare this effect to another popular Disneyland ride, it would be the darts shot at you during the Indiana Jones ride.

The theater I was lucky enough to experience The Rise of Skywalker in was also equipped with one of the newer effects, which also comes from the headrest. From the same place that the air bursts came from in the headrest, there was a heated air effect that was used during explosions scenes. The heat can also be a welcome break from the wind and rain elements, which can sometimes be chilly when used together.

Effect 4: Leg Ticklers
The leg ticklers are a couple of moving tubes (or some variation) that hit your legs to simulate movement. While the leg ticklers were used to a higher degree than usual, it was also often in conjunction with the other effects. The one isolated time I noticed it was when the leg tickers were utilized to simulate quicksand, which was extremely effective. More often than not, it was used during explosions/crashes.

Effect 5: Water Elements
Although it is only utilized in a few key scenes, I would argue that the water elements are among the most effective in The Rise of Skywalker. There was everything from a light mist to a heavy downpour in one key fight scene amidst a turbulent high tide. Not since Aquamanhas a film utilized this effect with as much impact. If you are opposed to getting wet, however, there is a button to turn off the water effects for individual seats. With that being said, I would recommend bringing a warm sweatshirt so that you can comfortably leave the water for the full 4D immersion.

As previously mentioned, there are air blasts coming from the front seat, and occasionally there is water added to these blasts. I believe this only happened once in The Rise of Skywalker, as it is often used for blood splatter (which Star Wars has none), and the occasional gross impact like a sneeze or a wet burp. Star Wars refrains from the novelty of these gags.

Element 6: Floodlights
Often utilized to simulate lightning and explosions, there are large floodlights that flash on the sides near the front of the screen. There are more than a few of these explosions in The Rise of Skywalker (often paired with the heat effect), but the flood lights were used in a number of other creative ways for this film. I already mentioned the vibration that occurs with the use of lightsabers, but the floodlights were often also used to sell the power of impact. Other times the floodlights were used alongside bursts of electricity coming from droids repairing or being repaired. Few films have used the floodlights as often or as effective.

Element 7: Wind
The wind elements are often used to simulate forward motion, when not used for natural weather effects in outdoor scenes. This film never uses the fans to the extent that it feels like a distraction, but often simply in combination with the others to create a unifying experience. This is especially effective during warp speed.

Element 8: Smoke/Fog Effects
There are more than a few large explosions in the film, and these are often paired with smoke effects, which fill the theater before the fans clear it away. I am always amazed at the technicians’ ability to have the fog/smoke fill the room while never quite obstructing your view of the film. Along with the smoke, there are some scenes that the fog is used for more atmospheric effect.

Element 9: Snow
Speaking of atmosphere, there is no more magical of an effect than the one that makes it snow in the movie theater. Of course, it is not actual snow but merely bubbles sent out to simulate falling flakes of frozen water, but that doesn’t matter. Even knowing this, the snow brings a smile to my face every time. While there is only snow on one location, the effect is used multiple times throughout those scenes. The kids will also love this, because it comes during one of the film’s few slower moments.

Element 10: Scent
The last effect worth mentioning is scent. Although not nearly as flashy as some of the others, the release of certain scents into the theater during key scenes is still worth mentioning. My only problem is that I have trouble distinguishing what the scent is supposed to be. that being said, it is a pleasant smell whatever it is, and often comes during more peaceful sequences, so that the other effects don't distract from this somewhat subtle one.


Fans take their Star Wars very seriously. I must admit, I have never been the die-hard enthusiast. But that also allows me a certain level of objectivity, and while I am not able to praise the quality of the filmmaking without reservations, I can honestly say that the 4DX elements brought down my guard a bit. I was able to let go of my critical habits and embrace the childlike wonders, and I would argue that a great deal of that is thanks to the meticulous planning done by the 4DX technicians in designing the experience. Star Wars fan or not, The Rise of Skywalker in 4DX is undeniably awesome. 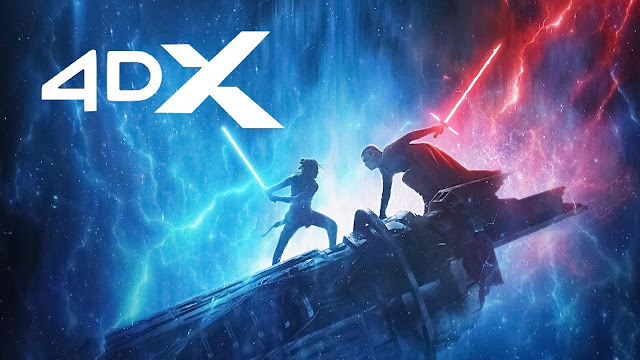