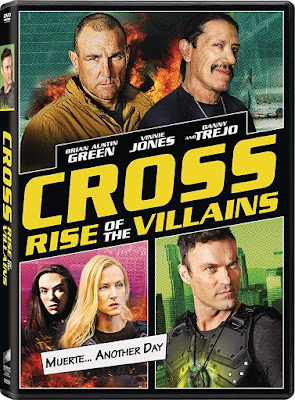 For everyone anxiously awaiting the next installment of the Cross superhero film franchise, Cross: Rise of the Villains, it has arrived. Now that I have addressed the parents of family members with supporting roles in the film, I can address everyone else. There is absolutely nothing redeeming about this film beyond the paychecks it provided an assortment of washed up minor celebrities. And there is nothing impressive about the film beyond its ability to attract name actors, all of which sleepwalk through their performances.

As the third film in the Cross franchise, you might expect there to be an established and coherent narrative, but that would only work if the previous films had the ability to leave an impression. After the release of Cross in 2011, there was a 6-year gap between films nobody wanted. Now we have the third installment, bringing back a superhero named Callan (Brian Austin Green) who wears a cross amulet for his power. Armed with amulets of their own, supervillains Muerte (Danny Trejo) and Drago (Manu Intiraymi) set out to destroy the world... or something. In order to combat the villains, Callan joins forces with former enemy, Gunnar (Vinnie Jones).

As expected from a superhero film, there is plenty of action. And, as expected from a low budget straight-to-video release, the action is all awful. The CGI effects are just plastered on, despite the actors barely reacting in ways that fit with the effects. To be clear, I’m not blaming the actors. No one person does a good job, so it is no single individual’s fault for how absolutely atrocious this movie is.

Part of what makes this film so incoherent is the overwhelming number of characters. Sure, this is an excuse to cram in washed up name actors like Tom Sizemore and Lou Ferrigno in the otherwise throwaway roles, but it does nothing for the narrative. It ends up barely feeling like Callan’s film, not that it matters when he is played by an actor as un-engaging as Green is. If you don’t care about the characters and aren’t entertained by the action, there are few reasons not to lean heavily on the fast-forward button.

There is one reason to watch this film, and this is to test your endurance. This movie belongs in the same category as Sharknado, in that the only reason to watch it is to enjoy how poorly it was made. There is nothing on the DVD as a bonus to make up for the awful film. This isn’t worth your time, much less your money.

Who ever wrote that review could use a lesson in grammar. Poor thing. Sounds like you wanted to be a film maker but ended up at the bottom of the barrel and attempting to write reviews. Enjoy your job at The local video store.

Filmmaker is not spelled with a space. Also I’d remove the “and”, and there is no reason to capitalize The.
Anyhow, can we all agree that this movie is terrible? After seeing the trailer I had to google to see if it actually existed or was some kind of joke.

I love how the person criticizing grammar just got a lesson in their own errors. Karma.

The gunfights were the single worst action sequences I have ever seen on film. And when the guy with the hatchet approaches the kid who was only winged in the shoulder and announces 'sometimes you gotta do things the old fashioned way, because it's Personal!' Well, that was the stupidest line allowed by law without a prescription.