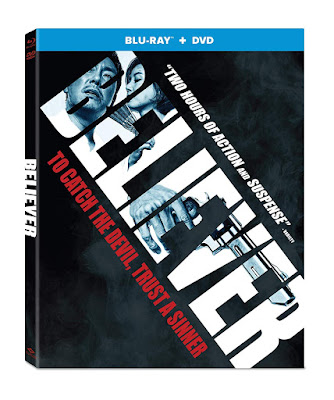 While Drug War was a non-stop thrill-ride of intensity, Believer is a more nuanced film. It almost feels like a marriage between Drug War and No Country For Old Men, which is ironic considering the age of one of the characters has been lowered considerably from the original film. Police detective Won-ho (Jin-Woong Cho) is determined to take down a major drug cartel, so he is frustrated when the psychotic kingpin sets a bomb to take out nearly his entire operation right before they finally have a way to catch him. Only a low level drug dealer named Rak (Jun-yeol Ryu) survives the explosion, and Won-ho realizes that he is the only remaining connection to the mysteriously elusive kingpin named Mr. Lee.

Because nobody has ever seen Mr. Lee in person, Won-ho decides to pretend to be him in a meeting with another psychotic criminal looking to work with him named Sun-chang (Hae-Joon Park), and then turns around and pretends to be Sun-chang in a meeting with Mr. Lee’s right-hand man, with Rak providing introductions where he needs to. These two simultaneous scenes in hotel rooms are among the most intense in the film, and director Hae-young Lee adds even more embellishments for those who already experienced the original. This is a film of bizarre underworld characters, and we get our first taste in this hotel room, continuing in the next sequence of mute chemists creating the drugs that Rak and Won-ho will use to trap Mr. Lee.

But as much as the film relies upon heavy suspense and offbeat humor, there is an empathetic touch to this screenplay that was missing from Drug War. A solid twenty-minutes longer than the original, Believer takes the time to show us the humanity of our protagonists in the quiet moments. And it also allows for a far more poetic ending, with enough ambiguity to have you contemplating the narrative long after the credits are over. Drug War is an undeniable thrill ride, but Believer knows how to make us care and think without ever sacrificing the polished visuals or action set pieces.

The Blu-ray release for Believer is not given any special treatment, but the film looks and sounds fantastic and sometimes that is enough.