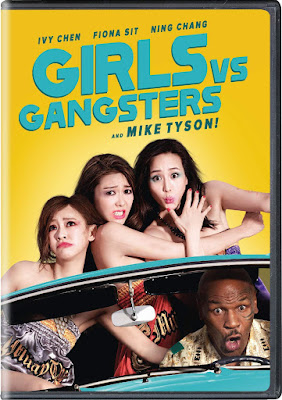 Although Girls vs. Gangsters is a sequel to a previously established Chinese franchise, most American audiences are more likely to find it recognizable due to the similarities in plot structure to the Hangover movies. Besides a gender swap and a far more conservative approach to the content, Girls vs. Gangsters owes so much to the Hangover formula that derivative is the only fair word to use in description. On the other hand, those who long for the silliness of those stories within an innocuous female buddy comedy need look no further.

Girls vs. Gangsters brings back the main characters from the hit Chinese comedy, Girls, but there is nothing so complicated that it can’t be figured out without watching the first film. Three women have been friends for years, despite having different passions and personalities. Hei is engaged to be married, so her childhood friends Kimmy and May take her on a wild bachelorette weekend in Vietnam. All seems to be going as planned until the three women wake up naked on a beach, handcuffed together with a suitcase full of gold belonging to a dangerous gangster.

As with The Hangover, the girls spend the remainder of the film attempting to retrace their steps and discover how wild their bachelorette evening actually got. Coincidences and random scenarios attempt to make up a majority of the humor, along with some bad slapstick and exaggeratedly cartoonish facial expressions. While this is all fairly common with Chinese comedies, Girls vs. Gangsters isn’t close to effective in its execution. Most of the humor ends up being unintentional.

Nearly all jokes in the film land flat upon delivery. This may be in part due to cultural differences, but that is just me being generous. A great deal of the humor fails because of bad writing and acting. The inclusion of former American boxer (and cameo from the aforementioned Hangover films) Mike Tyson does little to help either, as he delivers his lines in English every bit as stiffly as the Chinese actors speaking a second language. His involvement is a novelty, and one that quickly outstays its welcome.

The DVD release of Girls vs. Gangsters is actually given better treatment than expected. There is an interview with director Barbara Wong Chun-Chun and a trailer, which is more than a movie like this probably deserved. The film itself is nearly two hours long, and feels like it.