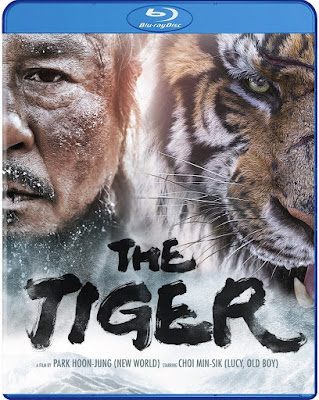 The screenplay for The Tiger is like a delicate balancing act, made possible by the tradition of effective melodrama in South Korean cinema and by the carefully patient screenplay from Hoon-jung Park (I Saw the Devil, New World). The film’s basic premise requires the audience to sympathize for the non-human title character, while also respecting the inevitable decision of the human protagonist to hunt him. This may seem contradictory, but it never feels forced within a simple but layered screenplay which is effectively executed thanks to nuanced human performances and an impressively realistic CGI tiger.

Min-sik Choi (Oldboy, Lucy) stars as an aging hunter named Man-Duk Chun, who has been living in the same wilderness as a legendary tiger for years, making him the expert the occupying Japanese forces first seek out in attempting to kill the beast. Angered by the embarrassment the tiger has caused the Japanese forces unable to kill him, a Japanese officer becomes single-mindedly obsessed with his defeat. By hiring countless Korean poachers to pillage their own land to serve the pride of Japan, The Tiger subtly shows the way that foreign occupation eroded national unity. Tigers are hunted to near extinction, but Man-Duk refuses to help them find the one tiger that they really want, hiding his own tragic past with the beast and the wilderness.

In the hands of many other filmmakers, The Tiger would feel contrived and manipulative. There is not a great deal of narrative beyond this basic premise, but it is in the execution that the soul of the film comes alive. Underlying themes provide layers of meaning beyond the surface spectacle. But the spectacle also never overwhelms the narrative, instead pacing out sequences of intense action with thoughtful drama and character development. Even if we know that the aged hunter will eventually face the tiger, there is no rush to force Man-Duk into this situation until it makes sense for the character, and this takes nearly all of the 140-minute run-time.

Just as important as Man-Duk’s motivations is the representation of the tiger itself. Ang Lee’s Life of Pi made incredible progress in the development of an expressive CGI tiger character, and The Tiger builds upon these technological advances. But it is more than just good special effects, though that certainly helps. The Tiger actually takes the time to make the animal a character, and it becomes far easier to sympathize with the beast when the tragedies he faces parallel those also occurring to Man-Duk. The flaws in some special effects of the action can easily be forgiven because of the film’s effectiveness in creating empathy for the CGI animal.

The Tiger is not a perfect film by any means. The effects are good, but Korean CGI is still noticeably sub-par to what Hollywood audiences have come to expect. The melodrama is effective, though often shamelessly manipulative. There were many times during the course of the film that my brain nearly rejected the content of the film, but suspension of disbelief was made possible due to the effective emotional impact of the melodrama. This is not atypical of narratives involving animals, though it typically does not end with them being hunted. The Tiger is a simple and beautiful film, but one which should have failed any number of ways.

The Blu-ray release is the best choice for a special-effects-driven movie such as this. Sadly, there are no special features to show the behind-the-screen process for the movie’s technical achievements, but this is still a preferred release, if only to appreciate the CGI tiger. All that is included in the extras is a trailer.