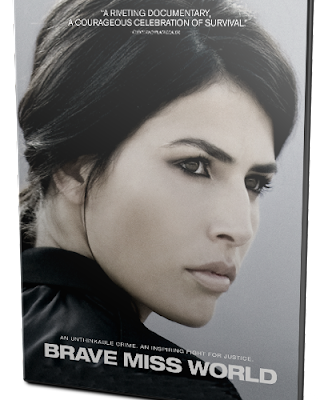 Though most attention went to the lack of diversity among the nominees during the 2016 Academy Awards ceremony, for many it was a performance by Lady Gaga which had a lasting emotional impact. The pop star was joined onstage during her performance of the Oscar nominated song from The Hunting Ground by dozens of rape victims. My initial instinct was to refer to them as former rape victims, but that is about as accurate as referring to someone who has been to war as a former veteran. This was made clear by the bravery of those onstage at the Academy Awards, but even more so in the strength shown within Cecilia Peck’s documentary, Brave Miss World.


This Emmy-nominated documentary focuses on the highly publicized story of Linor Abargil, 1998’s Miss and winner of the Miss World crown only 7 weeks after being brutally attacked and raped. After winning Miss at 18 and being offered opportunities to model in , Abargil was attacked by the very travel agent hired to help her on the journey. Abargil’s story remained unknown by the public until after she had won the Miss World pageant, which is what makes her story so unique, but her actions toward global recognition of the issue is where the strength of Brave Miss World lies.

Following the attention received from her story, Abargil has taken up the cause of speaking up on behalf of rape victims around the world. She visits victim centers in , gives speeches at Universities campuses in the , speaks at large benefits, but also takes the time to meet one-on-one with the victims. Whether dealing with larger issues or a single individual, Abargil offers up her own past for others, often freeing them to share their own pain. Seeing Abargil struggle with the pain of repeatedly facing her own attacks, relentlessly continuing on despite that pain, is what makes her truly brave. Though it is clearly easier to remain silent, a path many of the victims have chosen to take, the impact of an honest conversation is instantaneously and repeatedly seen throughout this documentary. And that is only taking into account the first-hand interactions within the film, not to mention all of those who can be reached through the viewing of this documentary.

On a personal note, this film had an incredible impact on me as a moderately young (for the time being) man. I used to imagine that having a girlfriend or a loved one raped would be the worst possible situation, but mostly because of the powerlessness I anticipated feeling in that situation. Sadly, I have had those conversations and I have felt powerless, but the difficulty hearing about the pain can’t be compared to having to live it. To quote Madeleine L’Engle, “We all suffer alone in the real world. True empathy is impossible.” I would agree with that, but would counter in agreement with Roger Ebert that “for me, the movies are like a machine that generates empathy,” and Brave Miss World gave me a gift of insight generated by Abargil’s strength and Peck’s ability to unobtrusively capture it on film. And though I may remain powerless to help remove the pain felt by victims, at the very least I will do my part in spreading the word about this important documentary.

The Blu-ray release of Brave Miss World comes with 100 minutes of additional scenes and survivor stories. The film itself includes many along Abargil’s journey, including heart-wrenching testimonials from celebrities Joan Collins and Fran Drescher, but the special features allow this material to breathe outside of the editing constraints of a feature. There are also 15 subtitle options, to be certain this film can be as universally viewed as possible. This is a topic which needs to be discussed in every language, for all of humanity.


The DVD/BD is now currently available on www.bravemissworld.com (also available digitally ) – and the DVD/BD will be available for sale through additional providers on July 5th.