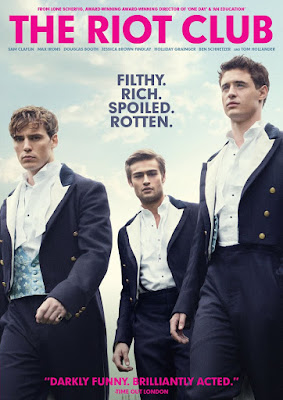 The Riot Club is about an elite group of wealthy and privileged students in a secret society at , providing for audiences the perfect subjects to loathe as symbols of the entitled upper class. The division of class is not a new subject for British cinema, but The Riot Club lacks the dark humor and satire from the days of classic Ealing comedies such as Robert Hamer’s Kind Hearts and Coronets. Even much of the humor from the play by Laura Wade, “Posh,” which she adapted into the film’s screenplay, is missing in favor of tension and drama, leaving anger as the audience’s default emotion to the events.


As the debauchery of the wealthy takes over the film’s plot, director Lone Scherfig (An Education, Italian for Beginners) is extremely effective in evoking emotions from the audience, despite little profundity within the screenplay’s social commentary. At one point near the end of film, a victim of this bad behavior is unable to distinguish which among the ten members of the club actually wronged him; he remarks that they all look the same, which is an accurate statement about both the characterization and casting. Despite a few minor differences in personality, it becomes difficult to tell these generically snobby Abercrombie models apart for much of the narrative. Even if the choice to cast actors with similar features was an intentional symbolic choice, it makes distinguishing one from another near impossible for those not already familiar with the cast. I'm also not sure that casting the son of Jeremy Irons was the best choice for a film intending to criticize nepotism.

Though the screenplay tries a bit too hard to show us the variety in personality types among these generic looking upper-class club members, the focus remains on two freshmen who are recruited to fill open spots. Miles Richards (Max Horn) comes from a wealthy family but somehow manages to remain down-to-earth, displayed by his willingness to date another student who had the gall of being accepted to for her intelligence rather than family connections and wealth. Alistair Ryle (Sam Claflin) is the polar opposite, as displayed by his stuffy name and with his disgust for the lower class outweighed only by the pretentiousness of his entitled attitude. These two characters have so little in common that it becomes difficult to understand how they would ever end up in a club together.

The film is far more interested in showing the disgusting behavior of the club than it is explaining what the draw was for Miles, whose personality never meshes despite the fact that he looks the part. It is a one-note film that continually coaxes disgust from the viewers. This is done exceptionally well, but the end of the movie inevitably feels hollow and pointless regardless of how effective the journey may have been. I spent much of the film cringing, dreading events that never occur and loathing those that do. Scherfig’s ability as a director make these moments effective, even though some of the bite from Wade’s play was somehow lost in the translation.

The DVD release includes a trailer as the sole special feature.