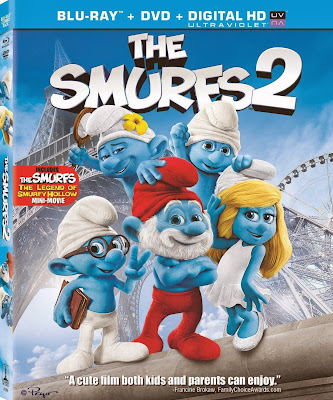 The most uninspired thing about this film is the title, which doesn’t allude to any of the plot points in the sequel. As well as being something of an origins film for Smurfette, this storyline also takes the creatures to the city of . The first had them in the hustle-and-bustle of , but this time there are plenty of other gags involving French citizens and the iconic landmarks of . Patrick and Grace Winslow (Neil Patrick Harris, Jayma Mays) are also back to help their blue buddies, along with Patrick’s unreliable father, Victor (Brendan Gleeson). It is rather amazing that this film was able to gather such a cast, and also disappointing at how much they are wasted, with the exception of Azaria in the dominant role of Gargamel.

The Blu-ray combo pack comes with a DVD and a Digital HD Ultraviolet copy of the film, though this is only the beginning of the extras that come with this high definition release. Exclusive to the Blu-ray are a number of interactive features, including a Smurf-O-Vision app for ipads and such. There are also three additional features, two of which are about the addition of the Naughties Hackus and Vexy to the storyline and Smurf mythology. The DVD also includes a featurette about Smurfette, a featurette about animating Azrael and deleted scenes. There is also the mini movie created as a Halloween special, “The Legend of Smurfy Hollow.”