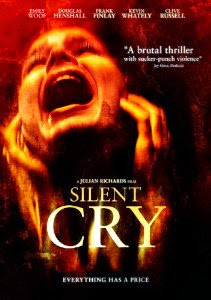 Silent Cry is far from a bad film. It is a subtle suspense drama with a somewhat compelling mystery at the center of the storyline. The acting is very good, the script is solid and the directing is effective albeit a bit safe. The biggest problem with the film is the level of expectation that the DVD cover art provides. The image brings to mind a horror film, not a conspiracy mystery. And expectations can be sent even further in the wrong direction if you are to read the blurbs for the film on the front and back of the DVD case. Jay Slater of Darkside says that Silent Cry is a “brutal thriller with sucker-punch violence.” I think it would be more accurate to describe this as an emotion-driven thriller with mild suspenseful violence which would be tame by today’s television standards.

Rooted in a tradition of British melodrama, Silent Cry begins as a film about loss. Rachel Towne (Emily Woof) is a single pregnant woman with all the optimism in the world until she is told that her newborn baby has died overnight. Suspicious of the hospital, doctors and everyone else involved, Rachel makes it her mission to find out what really happened to her newborn baby. What could have easily been dismissed as the grief of a mother is quickly confirmed when corrupt police officer Dennis Betts (Clive Russell) threatens her safety.


The film works on two principles; it is suspenseful because of the constant danger coming from the pursuit and attacks by Officer Betts, and a mystery involving the conspiracy behind the missing baby. The only ally Rachel has in the process is a janitor named Daniel Stone (Douglas Henshall), whose good nature and unselfish behavior are a godsend. This film is actually from 2002, though it is mostly just the soundtrack which makes it appear slightly dated.