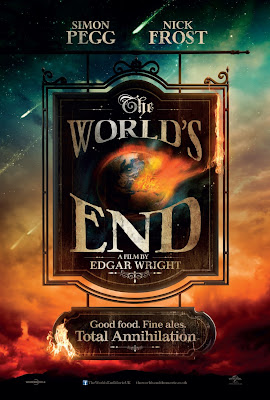 Keeping true to the themes of male friendship paired with a melancholy about youth lost, The World’s End is a fitting end to the trilogy. Simon Pegg serves as our narrator, and the film’s most volatile and unpredictable character, Gary King. Struggling to adjust to the idea of being an adult as he reaches middle-age, King convinces his former cohorts of youth (Nick Frost, Martin Freeman, Eddie Marsan and Paddy Considine) for a return visit down memory lane. They attempt a pub crawl 20 years after they failed it the first time, and somehow become entangled in a robotic overtaking of sorts. 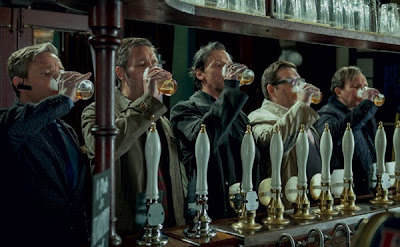 The ways in which these three films interact with each other is worth investigating, and I could spend this entire review remarking on the clever connections. All three star Simon Pegg and Nick Frost, whose friendship is central to each narrative. Shaun of the Dead and The World’s End both imagine an apocalypse which must be survived by an adult male protagonist living an irresponsibly youthful existence. Both Hot Fuzz and The World’s End involve a small-town conspiracy uncovered by an outsider. There are many connections between the three, but they all also stand on their own.

At the same time, it seems as though the criticisms given to Hot Fuzz were taken into consideration while making The World’s End, though it may not have been for the best. While Hot Fuzz seemed slow starting, The World’s End may show its hand too early. Or perhaps these actors and the dialogue is just far more interesting than any way the robotic invasion can be elevated. This is not a film with ground-breaking special effects, but that is not due to a limited budget. With a poster design, title and basic plot borrowed from a science fiction dud and a soundtrack which could be taken straight from a 1980s John Carpenter film, there is a campiness to this film which is a delightfully and intentionally campy.