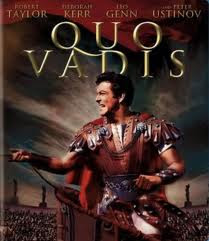 It may not seem that there is not as much to gain from transferring classic films onto Blu-ray as the latest CG spectacles of today, but Quo Vadis is worth having in high definition for the very fact that nothing is computer enhanced. Everything in the film is what was actually there when it was filmed, and often the costume and production designers put far more work into the film than can be picked up watching it on a DVD or VHS. This is the type of film that was meant to be seen in theaters, a reason to get people to turn their televisions off in order to see spectacle to large for a small screen. Thankfully today’s technology allows many people to have a theater of sorts in their own home, with the spectacle and sound captured along with the detail that might have otherwise gone unnoticed. In an epic film like this, running at 174 minutes, there is a great deal of detail to be seen.

Like many other biblical epics of the time, the film revolves around a Roman soldier’s realization of the error in his blind following of the emperor Nero. Nero, played spectacularly by Peter Ustinov, is portrayed more as a whiny infant than a malicious ruler. He makes cruel and heartless decisions, but he is so far removed from the violence that he is even able to see the destruction as artwork. Far more concerned with his greatness and the praise of those closest to him, Nero is even unaware of the growing sect of Christians in his kingdom. When he is informed of them it is in order to manipulate a scenario where he will not be blamed for burning .

Robert Tayler stars as Marcus Vinicius, a Roman general who returns to and falls in love with a Christian woman (Deborah Kerr) who makes him realize the cruelty of the kingdom. Although he refuses to accept her faith, Marcus stops at nothing to protect her and her family. This comes at a price, and eventually Marcus is forced to choose between loyalty to the childish ruler and the faith of the woman he loves.

The high definition presentation of the film is marvelous, as is having the lengthy film contained all on one disc with room left for special features. There is a featurette about the conception of the biblical epic, as well as a commentary track by film historian F.X. Feeney. The overture and exit music has also been added back into the film, taken out after the initial theatrical run.