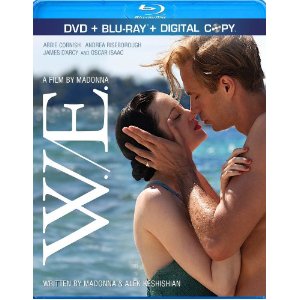 Madonna has fought painfully, as well as very visibly, to remain relevant in the entertainment world. People have stopped lining up to but her music the way they once did, and the attempts at acting were unsuccessful, time and time again. Even having a successful director like Guy Ritchie as a husband to put her in films was not enough. It did seem to influence her stylistic choices when attempting her latest endeavor as a director. W/E may look somewhat like a Guy Ritchie film at times, and have costuming which is perfect for time and setting, but in every other aspect it is simply a mess.
The storyline is two-fold, including some history along with some melodrama. The successful portions of the film are the historical moments, which what I though the entire movie was about. The real-life love affair between King Edward VIII (James D’Arcy) and an American woman named Wallis Simpson (Andrea Riseborough), however, becomes secondary to the story of an abused woman (Abbie Cornish) who sees the love story as an escape from her own bleak existence. There is a kind security guard at the exhibit for the romance from 1998 in , and eventually the abuse subsides.
I think the attempt was to take a feminist look at the historical romance. While this is somewhat admirable, the focus comes so strongly away from any relevance to the actual romance with the story of a physically beaten protagonist that it is hard for the film to recover. The screenplay which is co-written by Madonna and Alek Keshishian, is a jumbled mess. The former pop star shows no talent beyond the immediate look of the film. The costumes and the photography are beautiful, while all aspects of the content sincerely annoyed me.
The Blu-ray combo pack also includes a DVD and digital copy of the film. The only special feature is a making-of video which features Madonna, which seems to be a primary selling point of an otherwise average movie.